These forums are for discussion of NAD+ Boosters and Longevity

These forums are for discussion of NAD+ Boosters and Longevity 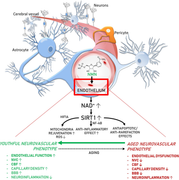 "We identified 590 genes differentially expressed in the aged neurovascular unit, 204 of which are restored toward youthful expression levels by NMN treatment.

The transcriptional footprint of NMN treatment indicates that increased NAD+ levels promote SIRT1 activation in the neurovascular unit, as demonstrated by analysis of upstream regulators of differentially expressed genes as well as analysis of the expression of known SIRT1-dependent genes.

Pathway analysis predicts that neurovascular protective effects of NMN are mediated by the induction of genes involved in mitochondrial rejuvenation, anti-inflammatory, and anti-apoptotic pathways.

In conclusion, the recently demonstrated protective effects of NMN treatment on neurovascular function can be attributed to multifaceted sirtuin-mediated anti-aging changes in the neurovascular transcriptome.

Our present findings taken together with the results of recent studies using mitochondria-targeted interventions suggest that mitochondrial rejuvenation is a critical mechanism to restore neurovascular health and improve cerebral blood flow in aging."

"In conclusion, rescue of cerebromicrovascular endothelial function and neurovascular coupling responses in NMN-treated aged mice are accompanied by marked anti-aging changes in the neurovascular transcriptome.

Potentially, NAD + booster treatments (e.g., in combination with STACs) could be harnessed for development of new pharmacological approaches for neurovascular protection for the prevention and treatment of VCI and neurodegenerative diseases in older adults."

This is very promising and I hope that the data continues to show positive results. Thanks for the share
Top

500mg/kg seems to work out to 40mg/kg in humans which is 2400mg dose for a 60kg human. Which is far above the range in the fertility study where 1600mg seemed to be too high for beneficial effects while 400mg seemed to work better.

One big difference between this study and fertility one is fertility used oral nmn in water, this one used nmn injections.
Top

One big difference between this study and fertility one is fertility used oral nmn in water, this one used nmn injections.

I think we are still very much on the bottom rung of the ladder when it comes to dosing with these molecules.
Top

One big difference between this study and fertility one is fertility used oral nmn in water, this one used nmn injections.